Rédigé par The Team - 15/08/2018 - dans Challenges - Téléchargement
An old school RE challenge was published on August 07th and has been solved by several people.
This blog post provides a detailed solution on how to solve this challenge followed by the winner write-up.

The challenge provided was not so complicated, its difficulty mainly relying on its architecture which is rarely encountered in CTF. Indeed, The program to analyze is an Atari ST ROM of the game MetroCross. The ROM was modified in order to add a cheat code, which was not originally present in the game and which permits to reach the last level. The goal of the challenge was to analyze the ROM to find this code.

If you check the Atari ST wikipedia webpage, you notice that the ST runs on the Motorola 68000 CPU. Good news, this processor is supported by IDA and a debug version of the steem emulator exists, providing a debugger with all its basic features (set a breakpoint, view/edit the memory content, etc.) Hence, it is possible to work on the challenge statically through IDA and dynamically with the emulator.

In this writeup, the emulator will be used to dump the memory while running the game, to locate the main function and to validate that the cheat code found works. When reversing an Atari ST game, it is easier to work on a memory dump for different reasons:

Set up your emulator (don't forget to use the TOS v1.00), load the game and when you reach the game menu, pause the emulator and dump the memory content to a file. 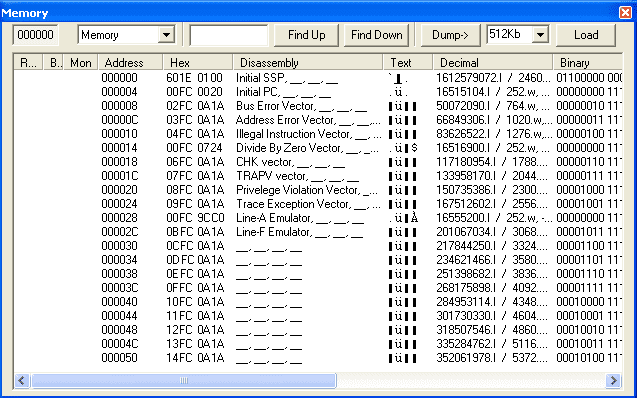 The dump can be loaded in IDA by setting the processor type to Motorola MC 68000 [68000]. If everything went fine, you should have the same addresses in IDA and the debugger.

An easy way to know at which address the TOS (the Atari ST OS) has loaded the game is to use the emulator. Once this address is known, we will be able to start reversing from the beginning of the game main code.

The emulator being currently paused, let's check at which part of the code is the Program Counter (PC):

At the end of this snippet, there is an instruction RTE (Return From Exception). PC points to the code that belongs to an interrupt handler (caused by the emulator being paused).

This code is not of interest, we can then select Debug > Run to RTE to leave the exception handler code.

Then, to locate the main function, we will put a breakpoint at the instructions RTS (Return To Subroutine, the equivalent of a RET instruction in x86) and click on "run" then "trace into".

The methodology used here is straightforward: backtrace the call stack to get to the main function. Following this methodology, we can conclude that the game code base is located at 0xA304.

At the beginning of the main function, there are three calls to the same function (the one we renamed ReadFileInMemory) with the following strings amongst the arguments:

This function is used to load a resource into memory (game data).

For example, the first call at this function is set up that way:

The book Atari ST Internals is a great documentation to get all the subsystem functions details.

To call a subsystem function, the function number and its parameters must be pushed on the stack. The function return value is stored in the d0 register.

In the function ReadFileInMemory, there are calls to respectively fopen(), fread() and fclose().

Now that you are familiar with the trap instructions, let's dig into the function we renamed LoadMusic.

By looking at the strings referenced in this function, one can guess that the function is used to load the music data files. However, several elements make us think that the original behaviour of this function has been altered.

According to the ST Internals book, the function number 5 when the trap #13 is executed is setexc (set exception vector), which has the following prototype:

By using the IDA search option to look for all the trap instructions (alt+t then type "trap" and check "find all occurrences"), we can see that both trap instructions are referenced in only one part of the code.

The trap #3 instruction is located in the part of the code that handles the keyboard interrupts:

0xFFFC02 is the static address of the IKDB data register. This address references the current keyboard "scancode"1. In this case, the "hook" is installed on the keyboard read handler (IKBD handler). The keyboard scancode is read in d0 and the trap #3 is executed. Therefore, the first custom routine, located at 0x11384, is executed as well. One must note that this handler is called each time a keypress is hit, so is our custom handler.

Below is the annotated "hook" function, the reader can take a look at the Atari ST scancode in order to understand the following code.

Because we are working on a memory dump, we did not have to bother with a little technique that was introduced in this challenge. Indeed, if you were reversing the ROM statically, you would have seen the instruction cmp.b #$14, d0 at address 0x1139E, making you believe that the cheat code is "TRUNK".

But if you take a look at the end of the function we previously called "LoadMusic", you can see the instruction _move.b #32,(loc_1139E+3).l that is used to self modify the code from the hook, patching the 'T' to 'D'.

Last but not least, the trap #14 executed at the main function after the main game menu, will execute the second custom routine that will just uninstall the hook.

This trap is installed right after the player leaves the main game menu, which is why the cheat code will not work if it is not typed on the menu.

The previous code restores the original code of the IKBD handler by patching the instructions 'nop ; trap #3' with 'andi.w #$FF, d0'

Write-up of the winner

Congratulations to the winner Orion from the well-known former french cracking team The Replicants. You can read his solution below:

The cheatcode is 'drunk'

The main difficulty is that the game assumes it is loaded by the TOS at fixed address $A304. The executable is actually relocatable but it contains several hard-coded addresses based on the previous assumption.

In particular, the routine located at $11ED2 installs a TRAP#3 handler at hard-coded address $11384 (the routine which checks the scancodes! see below).

Therefore, trying to run the game with a different TOS version or under a debugger leads to a crash because the game is loaded at a different address.

In order to be able to trace the game, I did the following:

One of the people who solved the challenge (Nicolas Iooss) found an interesting easter egg in the original game. This easter egg can be triggered when you have to enter a name in the high score table. If you have the highest score and enter the name SUGREF ..., we let you the surprise to find out what happens by yourself ;-)

Funny fact is that "SUGREF" matches the name "FERGUS" if you read it upside down. One of the guy in charge of porting the game from arcade to micro-computer is named "Fergus mcGover" and he used to insert easter egg in its ports. 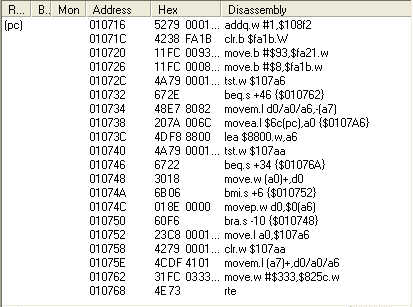