Rédigé par Fabien Perigaud - 17/09/2019 - dans Challenges , Exploit - Téléchargement
On September 7th, 2019, BFS published an exploitation challenge on Windows 10 x64 to win an entry for the BFS-IOACTIVE party during the Ekoparty conference. This blogpost aims at describing a successful resolution of the challenge.

The challenge is a single Windows 64-bits binary spawning a service listening on port 54321.

The rules consist in:

To be accepted, the exploitation code should be written in Python and work against the latest Windows 10 64-bits version (19H1, aka 1903).

The binary is quite small, and only consists in a few functions.

In the main function, the following actions are performed:

The table is quite interesting, since value C3 is the encoding for the RET instruction, and 48 8B 01 encodes a MOV RAX, [RCX]. Let's keep this information for later.

On the connection handler side:

When looking at what happen to the received data, we immediately know we face a challenge, the behavior being very unusual:

Looking for a vulnerability

When looking at how the size is checked and used, one can notice a bad behavior: 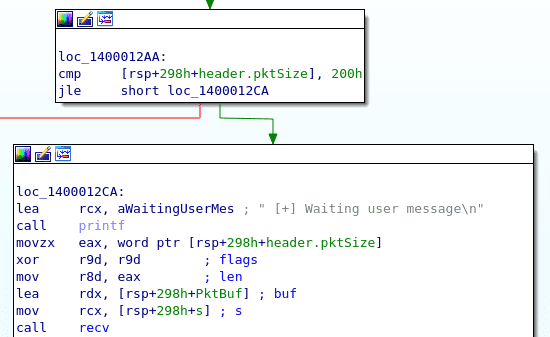 This is clearly a vulnerability, as we can forge a size field which will pass the comparison (providing a negative 32-bits integer) and will be greater than 512 after the cast. For example, using value 0xffff0400 will pass the check because it represents the signed number -64512, but size 0x400 will then be used for the recv() call.

Just after the fixed-size buffer are the two aforementioned stack variables: offset and data_pointer, which mean we can change both the code executed in the placeholder function and its argument! If we stick to the used offset (3E), changing only the data_pointer provides us with an arbitrary read, which is a very strong primitive for a remote exploit. However, we still have to find a suitable memory address to read!

Considering we can chose an arbitrary x86 prefix for the executed mov instruction, we can change offset to use the GS override prefix, changing the called function to:

On 64-bits Windows, GS segment points to the Thread Information Block, a data structure containing various information about the currently running thread, with interesting values from an exploiter point of view:

From now, we have successfully defeated ASLR as we are able to read the whole binary memory space as well as the current thread stack.

We thus can redirect execution to the address contained in rcx. We just need to find a suitable gadget to make rsp point to our stack-buffer, which contains data we control. Such a gadget will allow us to execute a ROP-chain.

When we call the placeholder function, the stack-buffer we control is 0x60 bytes above. We can thus find a simple gadget adjusting rsp to fall in our buffer. Such a gadget can be found at offset 0x1aea in the binary:

For the ROP-chain, all we need is returning to main with controlled arguments on the stack to be able to call WinExec.

The first problem we face is that we need a gadget to set rcx and rdx, which are arguments argc and argv for function main. This can easily be circumvented by calling main+0x9, since the two first instructions copy these registers on the stack:

We can now provide main arguments by passing them on the stack.

Another thing we need to care about is the stack alignment. On Windows, it is assumed that the stack pointer is aligned on 0x10 after a function prologue. If the stack is not aligned, some compiler optimizations such as the use of XMM registers will trigger an access violation.

Finally, we need to craft the fake argv to have argv[0] pointing to a string we control. This can be done by scanning the stack to retrieve our buffer ("egg hunting" to find a magic value), and then crafting the fake array in the buffer. All the pieces (ROP-chain, fake argv, command to execute) can be put in the stack buffer.

After the WinExec execution, the main function will continue to execute until it tries to bind the socket a second time and fail. It will then return, using the next entry in our ROP-chain.

The final exploitation code is available on our GitHub, feel free to drop us an e-mail if you have a different exploitation technique!