Rédigé par Corentin Bayet , Mehdi Talbi - 05/11/2020 - dans Exploit - Téléchargement
In order to better protect its users, NBS System has asked Synacktiv to perform a source code review of Naxsi, a famous open source Web Application Firewall (WAF).
During this audit, Synacktiv discovered several vulnerabilities that could allow bypassing the application of the filtering rules.
This short blog post will present the most critical vulnerabilities and how they were fixed by NBS System.
The fixes have been published on version 1.1a quickly after they were reported: https://github.com/nbs-system/naxsi/releases/tag/1.1a.

Naxsi stands for Nginx Anti XSS & SQL Injection. It is a web application firewall (WAF) and a third party nginx module, designed to detect some patterns involved in website vulnerabilities. For example, its basic rules will block any request with a URI containing the characters "<", "|" or "'", as they are not supposed to be part of a URI. It is configurable and the rules are easy to read and write.

The installation of Naxsi is straightforward using the documentation provided in the wiki.

As Naxsi's maintainers care for the security of their users, they asked Synacktiv to perform an audit. The target of the audit was the filtering engine, and Synacktiv tried to bypass the filtering, or to compromise the engine.

The audit was realized on the version 0.56 of Naxsi, identified by the commit f73b525f294de00a4f777e6b495c798d7c0d6ad4. The names of many of the functions might have changed since, so make sure to look at the right version of the sources!

Naxsi was installed with nginx, with the latter hosting the website Damn Vulnerable Web Application (DVWA). This web application is designed to be vulnerable on purpose to many common issues, like SQL injections or XSS. This setup allows us to perfectly test if Naxsi correctly detects basic patterns of SQL injection or XSS. The rules used are the Naxsi core rules that are supposed to prevent most patterns used to exploit common vulnerabilities in web applications.

Analysis of the filtering engine

To be able to detect malicious patterns in an HTTP request, Naxsi needs to be able to parse it entirely.

This parsing is very basic to do on a GET request, but can be way more complex on a POST request, as it can be in multiple formats. The format of the body of a POST request is indicated by the HTTP header "Content-type". Naxsi support four content types:

For each part of the request, the process is globally the same. Naxsi tries to isolate each user input depending on the format of the body. After checking that those are correctly formatted (e.g. no null bytes or invalid encoding), each of the user input is submitted to the function ngx_http_basestr_ruleset_n. It has the following prototype:

This function analyzes the strings name and value to check if their content match patterns defined in rules. The zone variable specifies in which part of the request the analysis has to be done, to only apply the rules that apply to this zone. Naxsi's analysis functions are mostly based on a system of a key-value pair. The functions responsible for filtering the input are expecting this kind of format since most of the user input are under this format: argument of a POST request, HTTP headers, etc. However, this is not always true. The name variable could be an empty string when analyzing for instance a URI's path.

The function ngx_http_process_basic_rule_buffer checks if the string str match the rule rl.

The function pcre_exec used is the one of the system, and was not audited.

The use of strfaststr to look for a pattern in a user input can be a problem. If the user input is not properly sanitized and contains a null byte, the research of the pattern will stop to the first null byte encountered, and will never analyze the data following the null byte. This could lead to a bypass of all filtering rules that are defined using a string. From this, we can conclude that any user input passed to the function ngx_http_process_basic_rule_buffer (and so ngx_http_basestr_ruleset_n) must never contain a null byte.

From this quick analysis of Naxsi, we can see that the potential issues when calling the function ngx_http_basestr_ruleset_n can be:

Naxsi implements its own JSON parser in C. The entire code is in the file naxsi_src/naxsi_json.c which is quite small, and can be audited entirely. The parsing of a body in a JSON format is done by calling the function ngx_http_dummy_json_parse.

An attentive reader can see that there is no sanity check that ensures the absence of null bytes in the body of the request.

It means that the parser will not reject a body that contains null bytes in any part of the JSON. When parsing the JSON, Naxsi will look for any key-pair value, extract it and send it to the function ngx_http_basestr_ruleset_n.

For example, the following JSON will result in a call to ngx_http_basestr_ruleset_n with "Key1" as name and "Value1" as value:

The lack of check on the presence of null bytes will allow an attacker to inject null bytes in the values passed to the ngx_http_basestr_ruleset_n. As seen in the previous section, it can lean to the bypass of any filtering rule defined with a string pattern.

A first request has been sent to the DVWA application to make sure that Naxsi detects and blocks the XSS pattern:

The request is then patched to add a null byte before the XSS payload ("\x00" represents a null byte):

The body of the request is defined as shown below:

The request is passed to the web application despite the presence of an evil payload.

One of the format supported by Naxsi is multipart/form-data. This format, defined mostly in the RFC 7578, allows sending data as a key-value pair in the same manner as the format application/x-www-form-urlencoded, but also supports binary blobs and files.

The function ngx_http_dummy_multipart_parse is used to analyze such requests. It first extracts the boundary from the HTTP header "Content-Type", then try to parse the key-value pairs expected in one of the two formats:

The function nx_content_disposition_parse will parse the "Content-Disposition" header and extract the following information:

The rest of the analysis depends on the return of this function.

If an attribute "filename" is found, then Naxsi will consider the following data as a file, and won't try to apply filtering rules on it. If it is not found, then Naxsi will try to apply the filtering rules on the data, and to do this, Naxsi needs to parse the body and extract them. The code responsible for the extraction of the data corresponding to the value is the following:

At the beginning of this code, idx corresponds to the index where the data of the value are starting, so just after the "Content-Disposition" header. At the end of this code, the variable idx and end will mark out the start and the end of the data to be analyzed by the filtering engine.

This code is flawed because the variable idx can be incremented in two cases:

In both cases, since idx is used as the very start of the data, if it is incremented, every data encountered before the increment will be ignored for the analysis.

The following request was sent to the DVWA application to check if Naxsi correctly detects and block the XSS pattern:

The request is then patched to inject a null byte (or the string "\r\n--") after the payload :

This request is not blocked by Naxsi, and is passed to the DVWA application, exploiting the XSS. The same result can be obtained by replacing the null byte by the string "\r\n--". 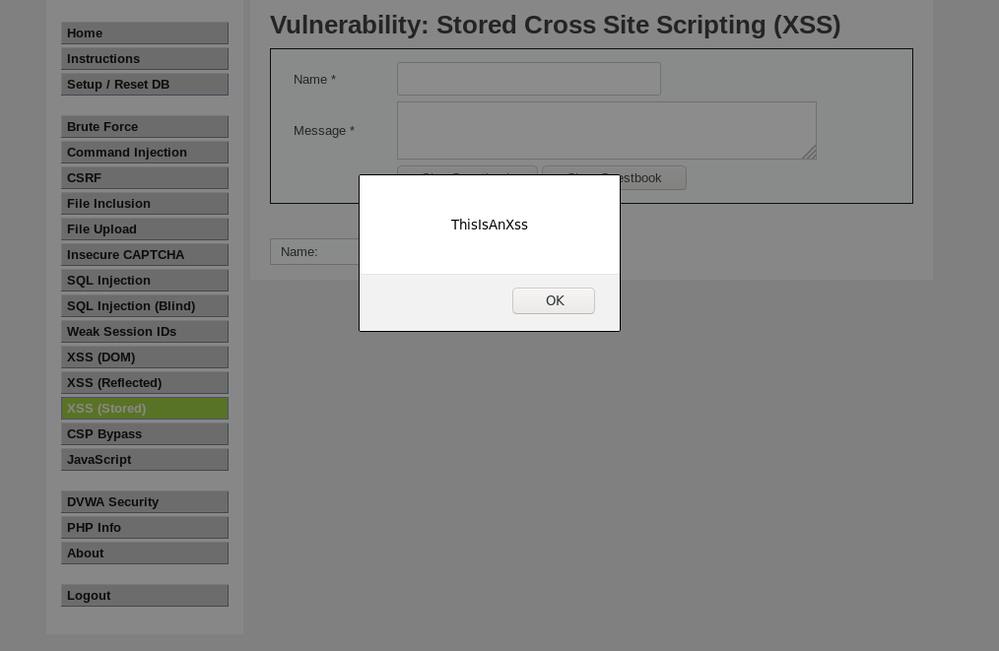 This vulnerability is exploitable in most configurations of Naxsi, because the format multipart/form-data is widely accepted by web servers. Most of them will accept this format in place of arguments directly in the URI. It means that the main use case of Naxsi, the detection of forbidden patterns in the arguments of a POST request, can be bypassed.

The two vulnerabilities discovered have a big impact on Naxsi, as they allow to bypass its main use cases. Both were reported the September 25th 2020, and were patched the very same day, which is really quick !

First, the commit 502b2aaead968d43bcf03fbbd55f5901d0a8d315 fixes the JSON issue, by simply adding a call to naxsi_escape_nullbytes, that replaces null bytes by the character "0", at the beginning of the function ngx_http_basestr_ruleset_n. It should fix any issue of user input containing null bytes.

This function does not stop on null bytes anymore, and so strfaststr neither. The name is misleading, as it is expected to stop on a null byte like any C-string function, but this ensures for sure that a rule's pattern is searched in the entire user input submitted to the function ngx_http_basestr_ruleset_n.

The patch added a call to ngx_strncmp that rejects the request if the boundary is not placed after the sequence "\r\n--". But at first sight, this code still seems vulnerable to the multipart bypass using a null byte. However, the ngx_strstr function has been replaced by the sstrfaststr... which as explained before, is misleading because it doesn't stop on null bytes anymore ! In this version of the code, we won't be able to make the sstrfaststr function return NULL with a valid HTTP request. The vulnerability is therefore fixed.

A dive into Microsoft Defender for Identity

We recently analyzed the detection capabilities of Microsoft Defender for Identity, a cloud-based security solution which is the successor of Microsoft Advanced Threat Analytics and part of Microsoft ...
Guillaume André , Mickaël Benassouli - 23/11/2022 - Pentest

Legitimate RATs: a comprehensive forensic analysis of the usual suspects

PHP filters chain: What is it and how to use it

Searching for new gadget chains to exploit deserialization vulnerabilities can be tedious. In this article we will explain how to combine a recently discovered technique called PHP filters [LOKNOP-GIS...
Rémi Matasse - 18/10/2022 - Pentest