Rédigé par Hugo Vincent - 14/03/2022 - dans Pentest - Téléchargement
So you have found an application vulnerable to Log4Shell, but the bypass gadgets are not working, and you did not manage to use a gadget from Ysoserial? If you read our last articles on finding Java gadgets you might have found a new one with gadget inspector. But what if gadget inspector did not find a valid chain? You might stop and be desperate because, as we saw, manual gadget research is not an easy task!

What is CodeQL?  From their documentation:

Discover vulnerabilities across a codebase with CodeQL, our industry-leading semantic code analysis engine. CodeQL lets you query code as though it were data. Write a query to find all variants of a vulnerability, eradicating it forever.

In other terms CodeQL is a very powerful static code analyzer that provides a way to analyze code by making queries. It's very useful when you're searching for vulnerabilities in white box. You can search for vulnerable patterns in your code by creating new queries or by using existing ones. It also provides data flow functionality to follow data across function calls, this can be useful to find injection vulnerabilities for example.

Translating the problem to CodeQL

First we need to translate the problem of finding Java gadgets to CodeQL. A gadget chain is a chain of function calls from a source method, generally readObject, to a sink method which will perform dangerous actions like calling the exec method of the Java runtime.

Sink methods are the dangerous methods that we want to reach. We can define them in CodeQL like this:

Here we define a new CodeQL class called RuntimeExec. Since this class extends the Method class this will match all the method which are called exec, defined in the Runtime class of the java.lang package.

Defining new sinks is quite easy. We define a DangerousMethod class containing each dangerous type of sink. New ones can then be added with a new check to that class:

We can search for calls to those methods with the MethodAccess class which represent a call to a method. For example the following query will return all the calls to the exec method:

Note that the code used in our examples can be found on our GitHub.

We want all the methods that calls a DangerousMethod, so we look for MethodAccess of dangerous methods, and we use the enclosing callable (the method which makes the call to the dangerous method) as a result:

Having precisely described the object we are looking for, the CallsDangerousMethod, it is straightforward to request them in our code base:

The VulnMethod is a CallsDangerousMethod callable because it uses Java reflection and calls the invoke method which is considered dangerous.

Callable, MethodAccess, Method, DangerousMethod all of this can be quite confusing if it's your first time using CodeQL. Playing a bit with this tool can help to understand those queries.

A source is a method that we can call to start the gadget chain, the first obvious one is readObject but there are other methods like:

Theses are methods that can be called when an object is deserialized so any Serializable class with one of these method is a valid starting point.

However, there are other known methods that we can call. From our previous article we know that we can call the get method of an arbitrary map. We can also think to hashCode, equals, compare...

All theses methods can be added to the source starting point:

Note that the declaring type of the source method must be serializable otherwise it can't be deserialized.

We can search for all instances of Source:

As you can see this hashCode method is a source but is also a sink which makes the gadget easy to spot.

Linking the sources to the sinks

We have the Source and the Sink now we need to link and find a path between them.

Most of the examples queries of the Security directory of the Java CodeQL repository are using data flow or tainted analysis. This is not relevant in our case because we are not interested in following a specific data since we control all the fields of the deserialized objects.

Indeed, a valid chain would be a method which is an instance of Source which calls one or several methods and the last one is an instance of CallsDangerousMethod. In CodeQL this can be done with the polyCalls method:

But this need to be recursive because a gadget chain is not just the source calling the sink:

Removing the serializable check is possible, it  will increase the number of false positive but can yield new results depending on what you want.

Now we have everything to find new chains.

We downloaded Java libraries which are known to contain gadget chains like the ones from Ysoserial and run our queries to validate that our technique is indeed working on real projects.

There is a chain in the Click library in version 2.3.0 the full chain is:

First we need to find sinks because, if there are no sinks we can stop here we won't be able to find a gadget chain and can stop here:

Then we can start looking for sources:

Note that the source must also be a RecursiveCallToDangerousMethod because we are not interested in sources which don't lead to a dangerous method.

We have one result, but what does it mean? It simply means that there is a chain between the call to the compare method and at least one of the sinks we previously found. Now we need to fill the chain with the intermediate calls.

There won't be any result for this query because the source and the sink are not the same. Thus, we add intermediate calls until we find a chain:

This chain is the same as the one from Ysoserial. The last method is getObjectPropertyValue which calls any getter method via reflection. This can be used in combination with the TemplatesImpl to execute arbitrary command.

Indeed, this is a known trick. The TemplatesImpl class is part of the JDK and if we manage to call the getOutputProperties method, we can load an arbitrary class and execute arbitrary commands. More details about this trick can be found here.

Note that when you find a valid chain leading to one sink you can keep adding intermediate calls to find all the possible chains leading to all the sinks.

As we saw in the Click1 example, the process is a bit manual, we need to go through each of these steps:

We repeated this process on other known vulnerable Java library to re-discover known chains like the ROME, Hibernate1 and the Mojarra chain from our previous article.

For the Hibernate1 chain we also found multiples variants of the original gadget like the one in red:

This chain is valid for the version 5.6.5 of hibernate like the original one.

The same goes for Mojarra. After the publication of our previous article @testanull on Twitter found another chain which can also be found like many others: 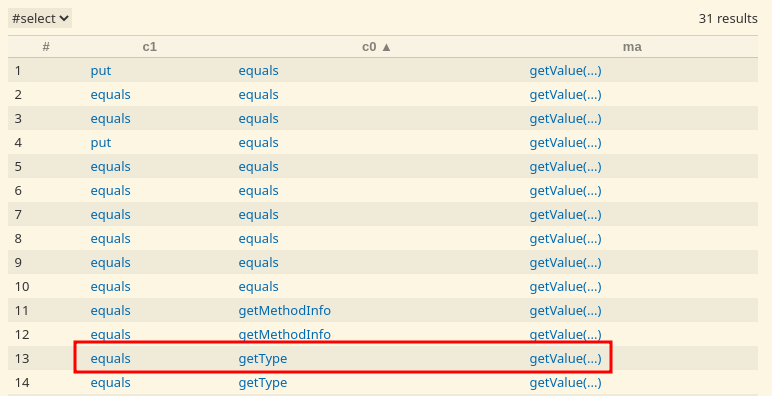 Note that gadget inspector didn't manage to find the ROME and Hibernate1 chain on their respective compiled jar.

Finding old gadgets is nice, but it's time to find a new one.

We run our queries on the Wildfly project. Wildfly is a Java application server, with more than 10000 Java classes.

By running the source query we can find the following readObject method:

This is obviously vulnerable to a JNDI injection. The exploitation code can be found on our GitHub and a pull request has been done to the Ysoserial repository.

The WildFlyDataSource class is part of the org.jboss.as.connector package and is bundled inside the WildFly GitHub repository.

Leveraging the power of CodeQL can be really helpful to find Java gadget chains. However, there are some limitations. First you need to have the source code of the project you want to analyze, and you need to be able to compile it otherwise it won't work with CodeQL. Another limitation is that CodeQL can only analyze one project at a time. You can't mix multiple libraries to find chains using both unlike gadget inspector that is able to do it, provided that you feed it with a single fat jar.

Nevertheless, finding source code of Java libraries is often possible and compiling it is quite easy with maven, Gradle or ant which make this approach still powerful.

We hope we brought as many details as possible on the process of finding new java gadgets with the help of CodeQL. Now it's time to find new ones, and please, don't forget to share what you find!