Written by Aymeric Palhière - 08/02/2022 - in Challenges , Exploit - Download
The Synacktiv team participated in the Insomni'hack teaser 2022 last week-end and placed 9th out of 280 teams. The onetestament challenge was pretty interesting and taught me a few tricks so I have decided to write a detailed solution. In this writeup, I have tried to illustrate the thought process behind solving this challenge, rather than just the usual solve.py (which you can still find at the end of the article). Expect to see some (old) heap tricks and enjoy the read!

The binary and libc were provided along with this pwn challenge, good point. 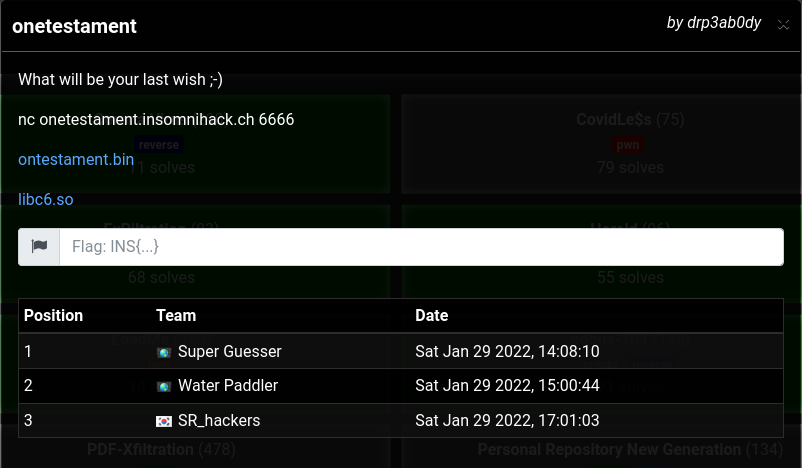 In terms of mitigations, the challenge binary is pretty heavily protected by Full RELRO, NX and PIE:

The provided libc being stripped, it could come in handy to retrieve its equivalent with the debug symbols. Luckily for us, pwninit does just that, as well as patching the binary so that it will be linked with the provided libc, instead of the system one.

The libc linking can be verified with ldd:

By the way, which version of libc is it?

If you're familiar with heap challenges, you know that the libc version is very important. Indeed, heap memory management has evolved a lot through time. Mitigations have appeared, memory structures have been added and the way they work has been modified. This is why heap attacks often affect one specific version of a particular libc. For more information, see the how2heap repository.

In our case, Glibc 2.23 is dated from February 2016, which is pretty old. An interesting thing to do, prior to starting the challenge, is to check what security fixes or mitigations have been implemented in newer versions of the libc.

Now, the initial setup is done and we can start reverse-engineering the challenge!

The program is very straight-forward. As for all heap challenges, you can create, edit, show and delete objects. At least that's what we thought when running the program for the first time:

At the very beginning of the program, a call to alarm(20) is made. This triggers a SIGALRM signal after 20 seconds and stops the program. In order to avoid this annoying behavior, one can patch the binary (nop the call to alarm) or simply enter the following command in gdb:

Let's make a quick tour of all the important functions.

The pseudo-code of the function: 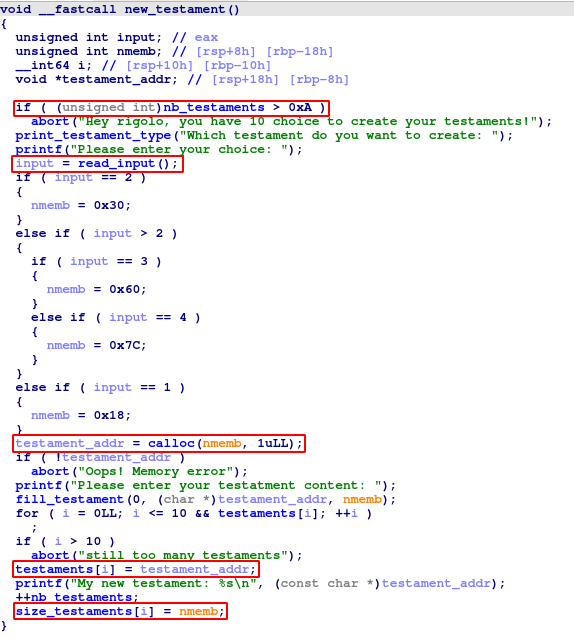 First, we can notice that only 10 allocations are allowed. A global variable (named nb_testaments here) is incremented after each new allocation.

Different testament sizes are available: 0x18, 0x30, 0x60 and 0x7c bytes. This will later come in handy in order to place our freed chunks, either in fastbins or unsorted bins. As a reminder, every chunks bigger than 0x58 bytes will be placed in the unsorted bins once freed.

Chunks are allocated by the calloc() function. One of the main differences between calloc() and malloc() is that the latter performs a memset(mem, 0, sz) of the memory area it allocates.

Then, the testament gets filled with user-specified data. Contrary to what one might think, the fill_testament() function is safe, and thus, won't be detailed here.

Another interesting point is that both the testament pointer and its size are stored into global variables from the .bss segment.

The attentive reader might notice that I've skipped the read_input() function. Its pseudo-code is the following:

5 characters are read from the user and stored into the char nptr[4] global variable. Wait what? Is that a 1-byte overflow?

Yes it is! Alright, let's keep that in mind and see how it can be useful later.

As in every heap challenge, we have a way to leak an address display the content of our objects:

random_sentences is just an array of ... random sentences that are displayed when calling this function. Wait, is that the challenge creator trolling us? I think so... Let's investigate this init_rand() function just in case.

Unless I am not aware of an arcanic trick involving fopen(), it definitely IS pure trolling by the challenge author 😆.

It seems we can edit testaments. Let's see what this function has in store for us:

The function verifies that the selected testament has been created before. However, there is no check that it has not already been freed. Cool kids call it a use-after-free (UAF).

Additionnaly, we can see that information about the selected testament is retrieved via the global variables testaments and size_testaments, interesting.

What's more, there is some sort of check that ensures we can only edit a testament twice.

Actually, this function does not allow the user to edit the full content of a testament. However, if we manage to mess with the size_testament variable, we could increment a single byte (at most twice), potentially out of the current testament bounds. Let's keep that in mind for the rest.

Whenever this function is called, the selected testament pointer is freed.

At first sight, it does not seem possible to free() a same pointer twice. Indeed, a global variable indicates for each testament whether it has already been freed or not.

Do you remember that 1-byte overflow in the read_input() function? Guess what lies right next to the nptr variable in memory?

The dword_5555556030B8 double word, which is affected by the overflow, is used to indicate whether the fifth testament (case 4 of the switch) has already been freed.

By following this recipe, we are able to trigger a double free:

We have now identified a few vulnerabilities and the double free seems to be the most serious lead. What's more, we know that exploiting double frees with fastbins is pretty straight-forward in glibc 2.23. However, ASLR and PIE being enabled, obtaining an address leak seems mandatory.

Actually, there is a way to exploit glibc 2.23 without leak. This technique is called House of Roman. However, this attack requires to be able to partially overwrite pointers and to do more allocations than we are allowed to.

So there must be a leak somewhere, let's dig deeper.

The only function that could potentially leak something interesting is the printf() at the end of new_testament():

However, it is only called after calloc(), which means that the allocated memory area has been zeroed out. Inspecting the source code of __libc_calloc reveals that, in some cases, memset() is not called and the memory area is not cleared:

This happens when the memory area we are trying to allocate is also a valid chunk, and that its IS_MMAPPED bit is set.

On x64, malloc chunks are preceded by 8 bytes of metadata. They include the chunk size, as well as different flags:

As an illustration, creating two testaments of size 0x90 produces the following chunks:

The objective here is to manually set the IS_MMAPPED bit so the chunk won't get cleared when allocated and we will possibly be able to leak an address by creating a new testament.

As if by chance, the edit_testament() function allows us to increment a single byte two times. That would be just enough for us to enable the IS_MMAPPED bit if the PREV_IN_USE bit is also set. What's more, there is no check that the testament we want to edit is not already freed, hence the UAF.

The problem is that the program checks that offset (our input) is not superior to size_testament. Actually, this is not really a problem. Indeed, following these steps will allow us to corrupt a chunk's metadata:

Notice that some libc pointers are now present in the freed chunk. This is simply because unsorted bins are maintained in a circular linked list. They are pointing to the main_arena where different heap pointers are present:

Since testament pointers and sizes are stored in global variables, we now should have two testaments pointing to the same chunk (0x555555605010):

The interesting part is that size_testaments[0] equals 0x7c (the former size of the large chunk), which is much bigger than the size of the chunk currently at 0x555555605010 (0x20). We can thus call the edit_testament() function and the size check will pass, allowing us to increment a byte out of the bounds of the current chunk.

That way, it is possible to increment the metadata byte of the following chunk two times, setting the IS_MMAPPED bit.

Specifying 24 as testament content will increment the 24th byte after the beginning of testament number 0:

Pwndbg now confirms that the IS_MMAPPED (with a typo) is set: 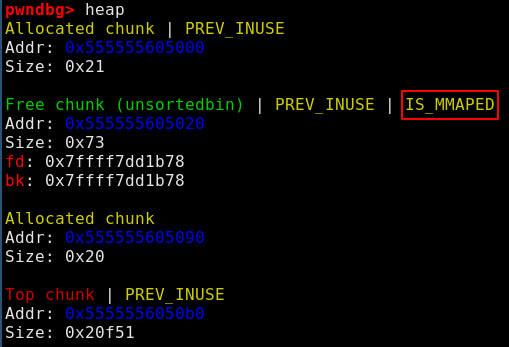 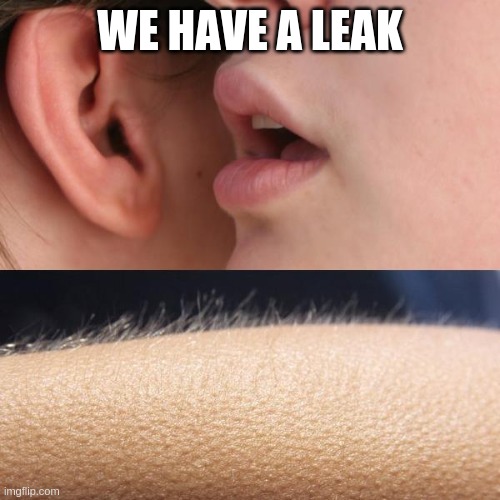 With a leak of a libc address, everything becomes a lot easier. The rest of the exploit will be less detailed since the techniques are already widely documented on the internet.

The plan here is to exploit the double free in order to obtain a chunk at an arbitrary address. A very popular way to exploit this kind of vulnerability is by writing a one gadget to the malloc hook. Then, the next malloc() call will execute the gadget, giving us a shell.

In order to do so, the following steps are needed:

One gadget and malloc hook

A one gadget is simply a gadget performing a call to execve("/bin/sh", NULL, NULL), present in most versions of GLIBC.

The second one has been kept because its constraint was naturally satisfied in the program execution flow.

__malloc_hook address can be found in gdb. The offset needs to be adapted with the leak:

Since we are going to build a fake chunk, the bytes before our address need to represent a valid size, or else the program will crash when trying to malloc.

It can seem quite shocking at first because addresses are misaligned, but it is not a problem for glibc 2.23.

We know what to write and where to write it, let's do it!

Then, we can trigger the one-byte overflow, which will reset the is_testament_5_freed variable (located at 0x5555556030b8 in the example below). It can be triggered by simply typing five characters into the main menu of the program.

After triggering the one-byte overflow:

This gives us the possibility to pass the check in delete_testament() and to free the testament number 5 a second time. This has the effect of creating a loop in the fastbins:

Now we need to create a new testament of size 0x70, which will hold the address of our future fake chunk, just before __malloc_hook.

Next, we create two chunks of size 0x70 in order to pop them for the fastbins linked list:

Finally, we will allocate our fake chunk by creating a new testament and giving it the address of the one gadget as content (0x7ffff7a5227a in the current context)

The full solving script is available on Synacktiv's github.

Kudos to @drp3b0dy for the interesting challenge and thanks to @mastho for his precious help during the CTF.

A lot of candidates, or simply fellow reversers, ask us how our team usually works: what kind of technologies are we looking into? What kind of projects? Do we work solo? How do we handle remote? etc....
Tiphaine Romand-Latapie , Eloi Benoist-Vanderbeken , Fabien Perigaud , Clément Berthaux - 13/04/2022 - Reverse-engineering

We recently identified a path traversal issue in the elFinder software. It is assigned CVE identifier CVE-2022-26960. While the vulnerability is pretty classical, the story of its discovery is not. Ke...
Gaetan Ferry - 30/03/2022 - Exploit , Pentest

Twice a year ZDI organizes a competition where the goal is to hack hardware and software. During November 2021, in Austin, hackers tried to exploit hardware devices such as printers, routers, phones, ...
Kevin Denis , Antide Petit - 25/03/2022 - Exploit , Reverse-engineering