Written by Tristan Pourcelot , Rémi Jullian - 25/11/2020 - in Hardware , Exploit , Système - Download
In this blogpost, we will find what happens when two security researchers find a random printer and then manage to find vulnerabilities in it.

From an attacker point of view, gaining code execution on a printer connected to the LAN can be interesting for several reasons:

Security researchers from Contextis managed to run the famous FPS video game Doom on a Canon MG6450 printer, as shown in 1. They exploited weaknesses within the encryption algorithm, used to encrypt newer firmware versions, in order to craft and deploy a custom firmware. Based on their work, we managed to obtain the firmware used by Canon Printer  from the MX920 series, such as the Pixma MX925: 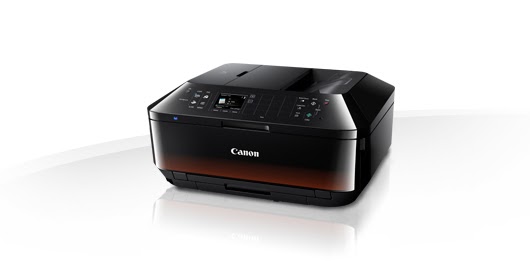 Thus, we spent a week, not trying to run a video game on a printer, but rather trying to find vulnerabilities that may be triggered from a compromised workstation, sharing the same LAN as the targeted printer.

In this blogpost, we’ll explain the firmware update mechanism, highlight the operating system behind Canon firmware, and talk about the attack surface and vulnerabilities that we found.

MX920 series firmware can be updated manually, through the dedicated section on the web-interface, used to configure and manage the printer. The following URL is hardcoded in the firmware, and is used to download an XML file containing update information in order to obtain the latest firmware for a specific model:

The ID used in the URL, 176b, looks like the USB Product ID, and is used by Canon to reference a unique model. As shown on https://devicehunt.com/view/type/usb/vendor/04A9, it is related to PIXMA MX920 Series.

If the version specified in the XML file is newer than the current one, a second URL (extracted from the XML) is used to obtain an HTTP redirection leading to the final URL in order to get the new firmware.

It’s interesting to note that the firmware doesn’t embed an HTTP client like curl or wget but rather implement a custom one, using low level sockets (User-Agent "IP Client/1.0.0.0").

As documented in Contextis's research 1, the firmware update file is ciphered using a XOR based custom scheme.

Reimplementing Contextis cleartext attack was just a matter of writing a script and analyzing the XOR patterns.

The script used for this attack is available in our Github repository at https://github.com/synacktiv/canon-tools

We are aware that newer printers released by Canon are fitted with firmware on which this attack doesn’t work anymore.

The decrypted firmware is a bootloader used to decompress and run the main firmware (ARM code). The first step is thus to take a look at the bootloader in order to find the decompression routine.

After identifying a few functions manually, IDA disassembly engine starts to pay off and few functions are automatically discovered. This one grabbed our attention:

It implements a small decompression routine, based on a dictionary, similar to the LZ algorithm.

By looking at the calling function (X-Ref), we can identify that:

As we identified the dictionary at offset 0x3FF000, relative from the start of the ROM, we can deduce that the base address of the bootloader is 0x04000000.

A Unicorn 2 script was written to emulate the decompression routine and get the uncompressed firmware:

As the decrypted firmware is just a binary file that can’t be properly parsed by IDA such as an ELF or a PE file, IDA can’t easily recognize data and code. Also, the entry point, base address and memory map of the firmware were unknown. While these problems are common when analyzing firmware, it was sometimes a hindrance to our analysis.

At the end of our reverse-engineering week, we identified at least 58k functions in the MX920 series firmware. With a bit of scripting, we were able to automatically rename a few functions which used debugging primitives.

On reinventing the wheel

During the writing of this blogpost, we discovered that someone (leecher1337) did publish exactly the same kind of decryption and decompression tool 3, several months before we even looked at the printer. So there are now at least two tools allowing you to decrypt Canon Pixma Firmware ¯\_(ツ)_/¯.

The operating system on the printer is based on a custom Real Time Operating System named “DryOS”:

This system is itself based on µITRON, a Japanese RTOS specification, as can be seen in the following string: "ITRON4.0"

This system is used throughout all of the printers firmwares we looked at, but is also used in Canon DSL cameras 45.

All of the services provided by the printer firmware are centered around more than 300 concurrent tasks. In the binary, these tasks are defined using the following structure:

Using this structure, we were able to identify the functions responsible for handling the different tasks in the firmware. For example, the following code extract shows the definition of the main HTTP server handler, and two of its workers.

In order to identify the attack surface, we ran a quick nmap6 check on the printer, which indicated at least 8 listening network services.

The firmware implements its own custom HTTP server. This custom server is recognizable thanks to the particular server string: KS_HTTP.

A shodan 7 lookup can then show us that there are around 3500 of such servers publicly accessible over the Internet.

The web server is handled by one main task, and several workers, which are  processing the available web pages using an array of the following structure:

For example, the CGI script /English/pages_WinUS/cgi_oth.cgi, targeted in our exploit, is defined in the handlers array in the following manner:

Each of the handlers is using a global shared object to access the request’s data.

BJNP is a proprietary protocol, designed by Canon, in order to print documents over the network, and perform LAN service discovery.

Not much resources are available related to this protocol, a good start is the source code of the debian package cups-backend-bjnp.

As this is a proprietary “binary” protocol (i.e handling many “size” fields), it is always a target of choice when looking for Out-Of-Bounds read/write or integer overflow vulnerabilities.

CGI scripts are a prime target for exploitation due to the fact that they parse user input.

This firmware was no exception, as the parsing of textual arguments is lacking length checks.

The vulnerable function is called throughout several CGI handlers, such as cgi_oth.cgi, cgi_ips.cgi or cgi_lan.cgi, thus allowing for several stack based buffer overflows.

The following code extract, taken from the cgi_oth.cgi page handler, illustrates the pattern for this vulnerability.

The function URL_decode_sub_1E20EFC6 is responsible for the overflow, as it will copy the arbitrary characters from the parameter inside the provided stack buffer. As it also decodes "%" encoded characters, thus allowing to write arbitrary data in the stack buffer.

A Proof Of Concept code triggering a crash of a targeted printer is contained in the following command:

Exploiting this vulnerability leads to a remote code execution with full privileges.

While the firmware is lacking protections against exploitation, such as stack cookies, writing a shellcode for exploiting the CGI stack based buffer overflow is a bit more complicated than usual due to the fact that the underlying system differs a lot from usual ones.

As we know our readers like challenges, we leave this as an exercise to them :)

BJNP Out of Bound write

The BJNP protocol is handled by the following tasks:

The task tskBJNPPrinterTCP initializes a context structure for handling BJNP messages received on TCP port 8611, and then uses socket(), bind(), listen(), accept() to receive incoming connections from BJNP clients. Each client is handled in BJNP_tcp_process_message, which reads a 16 bytes structure on the socket. This structure is defined in cups-backend-bjnp as following:

After reading the 16 bytes bjnp_header structure, the magic number is checked, and a dispatch function is called (using a fonction pointer) in order to process the message:

The dispatch function calls several routines according to the command code (cmd_code) specified in the header. An Out-of-band write vulnerability has been identified within 2 routines, called when dev_type is set to 0 and cmd_code is set to either 1 or 2. Here is the code of the routine related to cmd_node 1:

We didn’t manage to trigger this vulnerability on a physical device, as our test model (an MX 475 series printer) doesn’t have TCP BJNP ports open by default (cf: Opened TCP ports).

If you have an Canon MX920 series printer at home, feel free to implement a POC and tell us whether you managed to trigger this vulnerability !

As you'll see in the timeline section, Canon decided not to patch our vulnerabilities. In order to mitigate risks posed by vulnerable devices, we recommend to setup authentication using strong passwords, and if possible to segregate them from the network. We also recommend to keep them updated, when security patches are available. It's worth mentioning that Canon also released a document named "Useful tips for reducting the Risk of Unauthorized Access for Inkjet Printer", available at https://global.canon/en/support/security/pdf/inkjet-printer.pdf.

While it is really fun to play Doom on a printer, using previous research can unlock new quests8 for finding vulnerabilities in printers firmwares, which is equally if not more fun :) .

Captain Hook - How (not) to look for vulnerabilities in Java applications

During my 6-months intership, I developed a tool to ease vunerability research on Java applications. I used several software and libraries, and faced a number of issues throughout the development of t...
Antoine Gicquel - 19/01/2022 - Outils

Why you never managed to connect to this fre*king NTLM EPA protected website and how to finally reach it....
Pierre Milioni - 14/01/2022 - Outils

Yet another BEC investigation on M365

Several materials already describe this type of attack, this document is an operational feedback from the CSIRT Synacktiv on several BEC incidents based on Microsoft 365 service. This is the part one ...
Arnaud Pilon , Jean-Christophe Delaunay , Rémi Jullian - 22/11/2021 - CSIRT