This is for the Pwners: Exploiting a WebKit 0-day in PlayStation 4

Written by Mehdi Talbi , Quentin Meffre - 10/12/2020 - in Exploit - Download
Despite an active console hacking community, only few public PlayStation 4 exploits have been released. In this post, we will give a walk-through on the exploitation of a 0-day WebKit vulnerability on 6.xx firmware.

The exposed WebKit-based browser is usually the entry point of a full-chain attack: from browser exploitation to kernel exploitation. However, browser engine hardening techniques together with the total absence of debugging capabilities makes it very hard to successfully exploit bugs in the latest PS4 firmware.

In this post, we will introduce the root cause of the bug. The bug provides limited exploitation primitives. However, thanks to a weakness we identified in ASLR mechanism, we were able to make this bug exploitable. We will focus on the exploitation strategy we adopted and how we turned a non-trivial Use-After-Free into a R/W primitive leading to code execution.

The browser is probably the most common entry point to attack the PS4. The browser is based on WebKit and runs in a sandbox. Unlike iOS devices, there is no modern mitigation such as the Gigacage or the StructureID randomization and JIT is not enabled.

A typical exploit chain starts with a WebKit exploit to get code execution in the renderer process followed by a sandbox bypass to run a kernel exploit.

There have been a couple of WebKit vulnerabilities that have been successfully exploited in the past. The bad-hoistexploit - by @Fire30_ -  is the last known public exploit on the PS4. It exploits the vulnerability CVE-2018-4386 found by @lokihardt and provides read/write primitives. The exploit works on firmware up to 6.72.

Another vulnerability found by @lokihardt (CVE-2018-4441) has been also exploited on the PS4 by @SpecterDev. The exploit provides also read/write primitives and works on firmware 6.20.

For older firmware (< 6.xx), there are some few exploits by @qwertyoruiopz, @SpecterDev, @CTurt, ...

Regarding kernel exploits, @theflow0 released the last exploit in date. The exploit provides read/write primitives in the kernel and is reachable from the WebKit sandbox. The bug is present on firmware up to 7.02 and has been recently combined with the bad-hoist exploit to get a full chain on 6.xx firmware.

Finally, there are some few vulnerabilities on BPF that have been discovered and exploited by @qwertyoruiopz.

We strongly encourage readers to take a look at the excellent write-up by @SpecterDev and the blog series on hacking the PS4 by @CTurt.

WebKit has many heap allocators:

The primary heap is made of chunks that are split into smallpages (4 KB). A small page serves allocations for same-sized objects that are stored into smalllines (256 bytes). 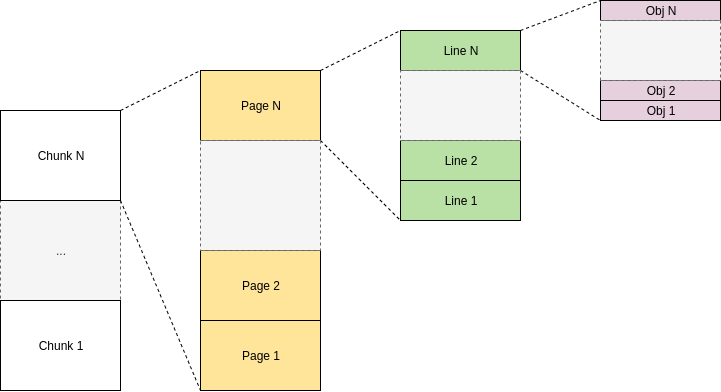 The primary heap allocator is, in essence, a bump allocator. Objects are allocated using the fastMalloc primitive that simply does the following when serving allocations using the fast path.

When the bump allocator is running out of available free object slots, fastMalloc's slow path is triggered in order to refill the bump allocator. The allocator is refilled either from the cache (fast path) - namely the bumpRangeCache - or from a newly allocated page (slow path). Regarding the slow path, a page is picked up from the cache - namely the lineCache or retrieved from the list of free pages maintained for each chunk. In case of a fragmented page (e.g., page allocated from lineCache), the contiguous free lines are used to refill the allocator. The rest of the free lines are used to fill the bumpRangeCache. 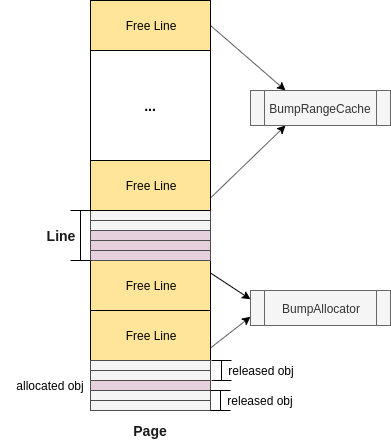 When an objected is freed, it is not made immediately available for subsequent allocations. It is inserted in a dedicated vector m_objectLog that is processed in Deallocator::processObjectLog when it reaches its maximal capacity (512) or while refilling the bump allocator through the slow path. The role of the processObjectLog is to release a smallLine if it's refcount reaches 0 (e.g., all slot objects in the smallLine are not used). When a smallLine is released, it's associated page is pushed into the cacheLine. Note that smallPages and chunks are also refcounted and therefore released when their respective refcount reaches 0.

The method buildBubbleTree makes a call to update the layout during which all user registered JS handlers are executed. If the ValidationMessage is destroyed in a JS callback, this could lead to a Use-After-Free situation when we get back to buildBubbleTree code.

The WebKit developers have identified that problems may arise while updating the style or the layout. However, they failed to fix the code due to an extra dereference while making a weak pointer. That is, we can still destroy the ValidationMessage instance during a layout update.

Hereafter is the fix after the reporting of the vulnerability:

The following figure summarizes the vulnerable path. We can instantiate a ValidationMessage object by invoking reportValidity on some HTML input field. We register on that input field a JS handler. For instance, we can define a JS handler that is executed whenever the focus is set on the input field. 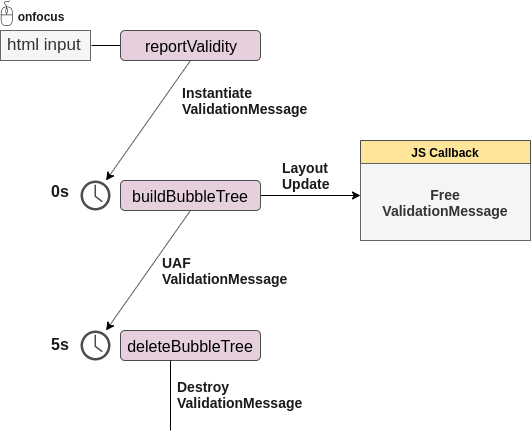 The reportValidity methods fire-up a timer to call the vulnerable function buildBubbleTree. If we set the focus on the HTML input field before timer expiration, buildBubbleTree will execute our JS handler during the layout update. If the ValidationMessage is destroyed in the JS callback, this leads to a UAF when getting back to buildBubbleTree code.

Our first attempt to trigger the bug failed. reportValidity sets the focus on the input field which triggers our JS callback too early. As a workaround, we used two input fields: input1 and input2. First, we register on the first input a JS handler on focus event. Then, we invoke reportVality on input1. This will trigger the execution of our JS handler that will simply set the focus elsewhere (e.g., on input2). Finally, before buildBubbleTree gets executed, we define a new handler on input1 that will destroy the ValidationMessage instance.

Triggering the bug on the PS4 leads to a browser crash with zero debugging information. To overcome this limitation, we have two options:

Anatomy of a vulnerable object

The ValidationMessage object is created by reportValidity and is mainly accessed by buildBubbleTree. This object is fastmalloc'ed and is made of the following fields.

The destruction of the ValidationMessage is done by the deleteBubbleTree method:

This method clears most of the ValidationMessage fields (including m_bubble) causing the browser to crash if it is invoked during a layout updating. More precisely, the renderer process crashes in the function adjustBubblePosition while attempting to dereference m_bubble.get().

In order to exploit this vulnerability, we need either a memory leak or an ASLR bypass. It turns out that we can allocate some objects at a predictable location by spraying the heap. However, the exploitation of this weakness requires a prior knowledge on memory mapping. We already have this for firmware 6.xx thanks to the bad-hoist exploit. The predicted address is theorically bruteforcable on 7.xx firmware (more on this later).

Here's how to avoid an early crash: 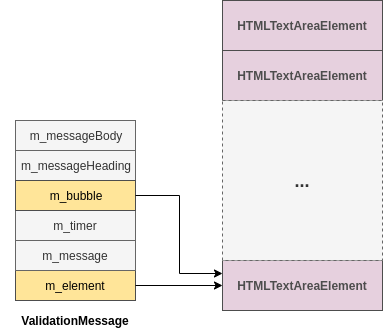 In order to reuse our target object, we proceed as depicted in the following figure: 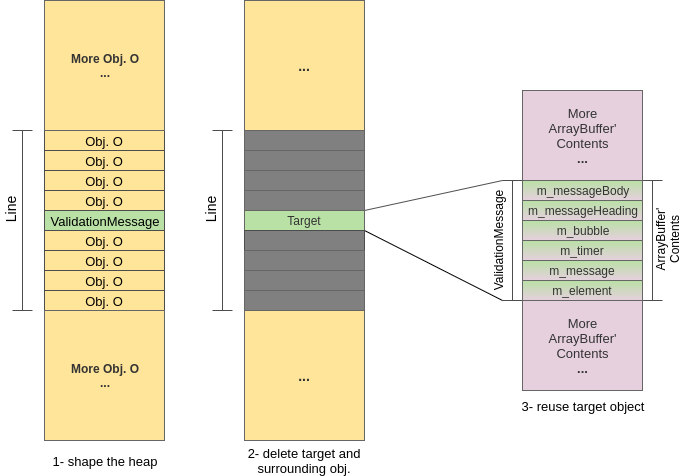 As stated previously, some of the ValidationMessage are instantiated after the layout update and therefore their content could be leaked. More precisely, by simply dumping the content of the ArrayBuffer, we can leak the value of m_messageBody, m_messageHeading, and m_timer. m_timer is particularly interesting because it is fastMalloc'ed and hence allow us to infer the address of objects allocated on the same smallPage.

Now, if we use our target object properly, we end up calling the deleteBubbleTree method that sets most of the ValidationMessage fields to a NULL pointer value. It is important to note that NULL pointer assignment on refcounted classes is overloaded and results in a refcount decrement. This means that we have a refcount decrement on multiple controlled ValidationMessage's fields: m_messageBody, m_messageHeading and m_bubble.

We can exploit the refcount decrement by corrupting for instance the m_messageHeading pointer and confusing its refcount field with some object's length field. By targeting for example an object with a length and data field such as the StringImpl object, the misaligned write on the length field would allow us to read beyond the data limit. 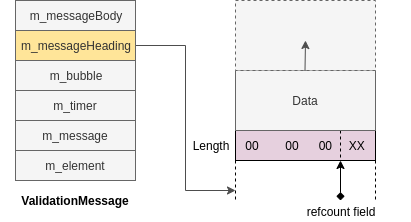 In the following, we will exploit the arbitrary decrement primitive twice:

The exploitation workflow is summarized in the following figure:

The goal of this part is to leak the address of a JSArrayBufferView object. This object is interesting from our point of view because it has a length field and it allows to read/write arbitrary data into a data buffer. If we can control the length field, then we can read/write beyond the limit of the data buffer. This object is allocated using the Garbage Collector. As we don't have any leak of this heap, we can't reach it using our arbitrary decrement primitive.

StringImpl is the JavaScript string representation. This object has a length field and it allows reading data into a buffer. In JavaScript, strings are immutable. This means that we can read but not write into the data buffer after initializing it. The object is allocated using fastMalloc and the size of the object is partially under our control. StringImpl are therefore a good target to get a relative read primitive.

This is our strategy to overwrite the length of one StringImpl object: 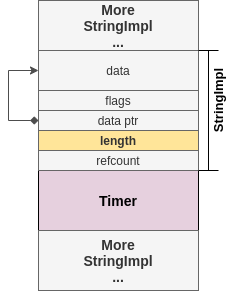 Once we have our relative primitive through a corrupted StringImpl's length field, let’s see how we can get JSArrayBufferView references on the FastMalloc heap.

Object.defineProperties is a JavaScript built in that allows defining JavaScript Object properties.

In its implementation, this method uses two objects:

This is the technique used by @qwertyoruiopz to get JSObject references on the FastMalloc heap: 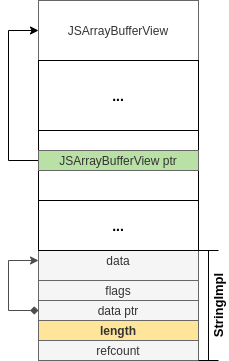 With a JSArrayBufferView leak, we can easily get a relative read/write using the following steps:

This reference can be used to read/write beyond the limit of the fastMalloc'ed backing buffer.

JSArrayBufferView object has a reference field to its data buffer. Corrupting this reference enables an arbitrary read/write primitive.

PS4 browser doesn't allow allocating RWX memory pages. But with an arbitrary R/W, we can control RIP register. For example, we can overwrite the vtable pointer of one of our previously sprayed HTMLTextAreaElement making it points to data that we control. Calling a JavaScript method on HTMLTextAreaElement will result in a call to an address under our control. From there, we can do code re-use (like ROP or JOP) to implement the next stage.

The exploit is available at Synacktiv's Github repository.

Porting the exploit on 7.xx firmware

We managed to successfully exploit our bug on 6.xx firmware due to a weakness on ASLR implementation that allowed us to predict the address of HTML objects. The predictable address is hardcoded in the exploit and has been identified thanks to the bad-hoist exploit. However, without a prior knowledge on memory mapping, the only way to determine the address of our sprayed HTMLElement objects is to brute force this address.

Brute forcing on the PS4 is tedious as the browser requires a user interaction in order to restart. Our idea is to plug a Raspberry Pi that acts as a keyboard on the PS4. Its main goal is to hit enter at periodical time (5s) to restart the browser after the crash. The brute forced address is updated at each attempt and stored in a cookie. 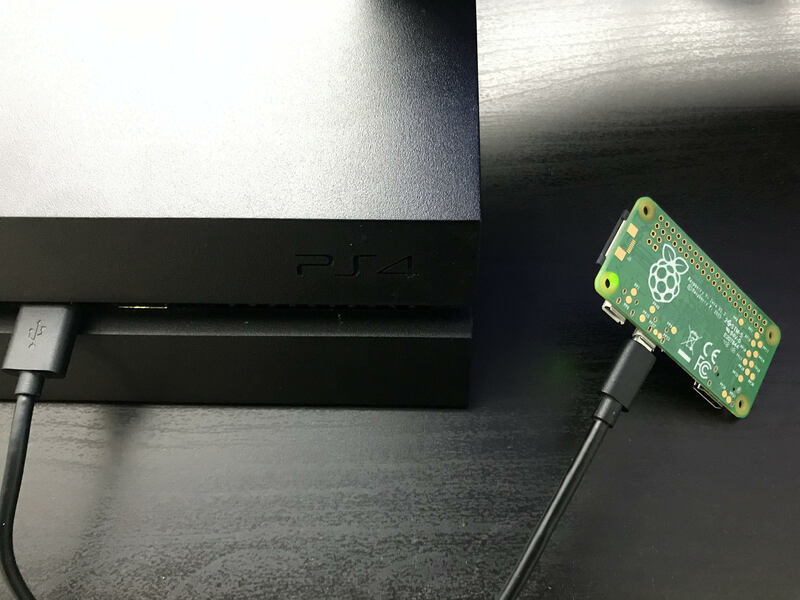 Unfortunately, we didn't get any result so far. We probably haven't run the brute force for a long enough period of time to cover the entire address space.